WODAN, Wōđanaz or Wōđinaz is the Proto-Germanic name of a god in early Germanic Religion.
Wodan or Wotan, in Old High German and Godan in Lombardic, also Odin in old Norse.

Wōdanaz is associated with poetic or mantic qualities, his name being connected with the concept of *wōþuz, "furor" (poetic fury), and is thus the god of poets and seers. He is a shapechanger and healer, and thus a god of magicians. He is associated with the Wild Hunt of dead, and thus a death deity. He is also a god of war and bringer of victory.

The adjective means "mad, frantic, furious".
The noun means "mind, wit, soul, sense" and "song, poetry",
In compounds, óð- means "fiercely energetic" (e.g. óð-málugr "speaking, excited").
The use of the word 'Odin' in Old Norse comes from Proto-Germanic *wōþuz
A very possible cognate is Sanskrit api-vat- "to excite, awaken". The Proto-Indo-European meaning of the root is therefore reconstructed as relating to spiritual excitation. 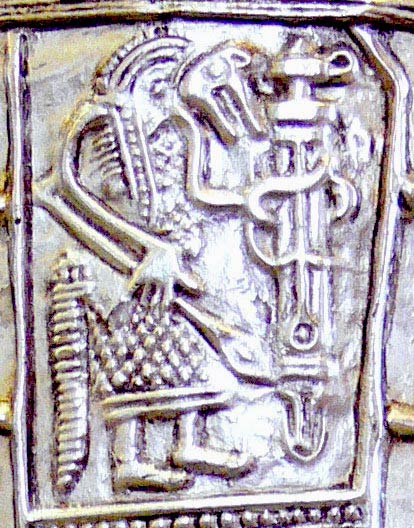 Above is the 7th-century Gutenstein scabbard, found near Sigmaringen, Baden-Württemberg, Germany. It shows a warrior in wolf costume holding a ring-sword - in offering to Wodan. Sigmaringen is a town in southern Germany, in the state of Baden-Württemberg. (NOTE: Info about the special 'Ring Sword' is further below).

The Anglo-Saxon tribes brought their faith from Germany to England around the 5th and 6th centuries and continued in that form of worship until nearly all were converted to Christianity by the 8th century. The Anglo-Saxon kings claimed descent from Wodan. According to the Anglo-Saxon Chronicle and the Historia Britonum, Wodan had the sons Wecta, Baeldaeg, Casere and Wihtlaeg, who in turn were ancestors of the royal houses of the Heptarchy.

The Historia Brittonum, composed around 830, presents a similar genealogy and additionally lists Wodan as a descendent of Godwulf, who likewise in Snorri Sturluson's Prose Edda is said to be an ancestor of "Vódan, whom we call Odin".

According to the Anglo-Saxon Chronicle, composed during the reign of Alfred the Great, Wodan was the father of Wecta, Beldeg, Wihtgils and Wihtlaeg and was therefore an ancestor of the Kings of Wessex, Northumbria, Mercia and East Anglia. As in Bede's Ecclesiastical History, a history of early Anglo-Saxon migration to Britain incorporating Wodan as an ancestor of Hengist and Horsa is given:
"These men came from three tribes of Germany: from the Old Saxons, from the Angles, and from the Jutes ... their commanders were two brothers, Hengest and Horsa, that were the sons of Wihtgils. Wihtgils was Witta's offspring, Witta Wecta's offspring, Wecta Woden's offspring. From that Woden originated all our royal family."
AND BRIEFLY:
The House of Welf is the older branch of the House of Este, a dynasty whose earliest known members lived in Lombardy in the 9th century. For this reason, it is sometimes also called Welf-Este. The first member of this branch was Welf IV; he inherited property of the Elder House of Welf when his maternal uncle Welf, Duke of Carinthia, died in 1055. In 1070, Welf IV became duke of Bavaria.

The Nine Herbs Charm:
Recorded in the 10th century, the Old English Nine Herbs Charm contains a mention of Wodan:
A snake came crawling, it bit a man.
Then Woden took nine glory-twigs,
Smote the serpent so that it flew into nine parts.
There apple brought this pass against poison,
That she nevermore would enter her house.

SOME HISTORY OF THE 'RING SWORD' They are found mostly on Continental Germany, (Saxony, Francia, Alemannia) but also in Vendel era Scandinavia and Anglo-Saxon England.
These swords were prestigious, prized possessions, probably reserved for kings and high nobility. The ring is interpreted as a symbolic "oath ring".

The Beowulf poem uses the term hring-mæl, literally "ring-sword" or "ring-ornament",[6] and scholars who interpret this as referring to this type of sword can point to it as one indication that the Beowulf poet was still drawing from an unbroken tradition of the pagan period, as ring-swords disappear from the archaeological record with Christianization, by the late 7th century.

Examples include:
• Germany (Saxony, Francia, Alemannia)
◦ the Beckum ring-sword, one of the oldest, dated c. AD 475-525, found at Beckum, Germany
◦ Wünnenberg-Fürstenberg, grave 61, 6th century.
◦ the Schretzheim sword, found in tomb 78 in the Schretzheim Alemannic cemetery, Dillingen, Bavaria, dated to between AD 580 and 620. The sword is a rare example of a blade inscribed with an Elder Futhark inscription, four runes arranged so that the staves form a cross shape.
• England
◦ the Kent (or Dover) ring-sword
◦ Sutton Hoo ring-sword
◦ the Chessel Down II (Isle of Wight) ring-sword), early 6th century
◦ Staffordshire Hoard k543 - a silver sword ring fitting of fixed type, among the treasure found near Hammerwich, Staffordshire. Thought to be associated with one of the older pommel-caps in the hoard, the piece has been dated to the early 6th century. Pommel-cap k711 also displays characteristic damage caused by the installation and later removal of a ring fitting in antiquity, like the pommel-cap from the Snösbäck ritual deposit in Västergötland.
• Scandinavia
◦ the Snartemo sword, found 1933 in tomb 5 at Snartemo, Vest-Agder, Norway, dated to c. AD 500.
◦ Vendel ring-sword, found at Vendel, Uppland, Sweden, 6th century.
◦ the Vallstenarum sword, found in Gotland, provides an important indication of the spread of the fashion. The sword was made in the early 6th century, and a ring was added only later, around AD 600, damaging part of the existing hilt decoration.