Touring with platinum artist, Laura Jansen in 2011 and a return tour in 2012 - discovering Germanys rich culture, music and history is a life time journey.

After a month musical tour through the city of Paris in 2011, (performing 16 concerts), the opportunity arose to join established Dutch artist, Laura Jansen on her German tour. Having rescent success with her version of Kings of Leon song, 'Use somebody'. The tour with her circled Germany from Munich, Cologne, Hamburg and Berlin. Adding to these concerts, Ew also performed in the city of Leipzig and had the opportunity to host yet another concert in a 500 year old Lutheran church nearby in the dorf of Mutzchen, such a beautiful town. While staying in Leipzig, another concert was organised in a special needs school called the Verner Vogel Schule.
Says Ew 'A large number of happy kids enjoyed the morning concert which was followed by a question and answer session. It's amazing how talented and big hearted these kids are, and also bi-linguel. As a gift the kids made sculpture and gave it to me after the concert.'

2012 saw yet another tour in Germany for Ew, growing to also incoporate concerts in the magical city of Dresden, one of the worlds truly beautiful cities.

"The city of Dresden was spectacular. Wandering the streets, eating the food and chatting with the locals at a street arts/food/music festival really gave you the sense of a vibrant community and alternative arts scene – a real buzz. I performed at a ‘Kultur Active’ event, their tenth year anniversary party, (great sound and hospitality), and also performed at an art gallery opening for a local photographer with great photos of Georgia. The architecture in Dresden is really astounding and we couldn’t get enough - can't wait to go back there!'. Ew 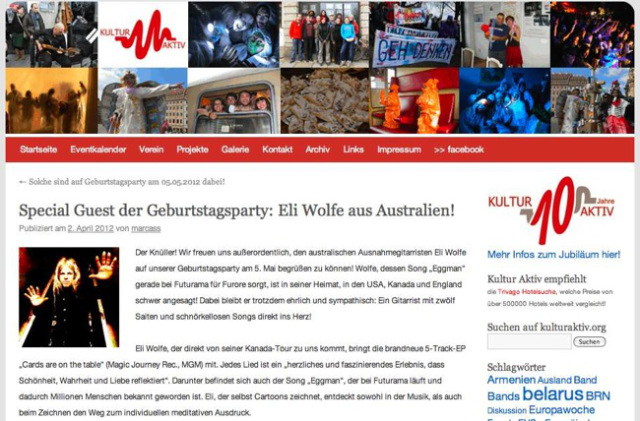 While in Dresden Eli Wolfe also visited local film studio, 'Balance Films.
"I had the great pleasure of meeting co-manager of Balance Films, Grit Wiskirchen, after a concert near Leipzig. She invited us for a guided tour of their animation facility in Dresden. I had a concert already organised in Dresden, and the chance to check out some cutting edge animation while we were there was an offer not to be missed! Grit and co- manager, Ralf Kukula have a great creative team there and the projects are diverse and exciting, among them is a marvelous re-make of Hansel und Gretel. Ralf Kukula is the author of a great book exploring the beautiful ball rooms (balle Hauses) and there intricate art and design."

'While in Berlin we visited the famous Tempelhof which is the worlds first international airport and was once one of the top twenty largest buildings on earth! The site of the airport was originally Knights Templar land in medieval Berlin, and from this beginning came the name Tempelhof.

Tempelhof served as the gateway to the world for hundreds and thousands of citizens. Also, for Marlene Dietrich, Martin Luther King, Zarah Leander, the Beatles and many other stars, celebrities and politicians, the airport was an international meeting place that provided the backdrop for countless news reports.
Quick Facts about the Tempelhof:
It was the world's first commercial airport.
it was the world's busiest in the 1920 and 30s.
Deutsche 'Luft Hansa' was founded in Tempelhof on 6 January 1926.
It became the world's first airport with an underground railway.
It was the first building designed with the help of an early computer (developed by Konrad Zuse, a pioneer of information technology).
A little about Konrad Zuse:
His greatest achievement was the world's first functional program-controlled Turing-complete computer, the Z3, which became operational in May 1941. Thanks to this machine and its predecessors, Zuse is regarded as the inventor of the computer. Zuse was also noted for the S2 computing machine, considered the first process-controlled computer. He founded one of the earliest computer businesses in 1941, producing the Z4, which became the world's first commercial computer. From 1943 to 1945 he designed the first high-level programming language, Plankalkül. In 1969, Zuse suggested the concept of a computation-based universe in his book Rechnender Raum (Calculating Space). One of Konrads first documented influences on a US company was IBM's option on his patents in 1946.

Onto LEIPZIG - From Goethe and Bach

In Leipzig we paid homage once again to the Thomas Kirk (Church), home of Johann Sebastian Bach and some amazingly well kept 17th century instruments like cello, viola and tympani.

A few days exploring Neuschwanstein Castle, Bavaria.
"Making a tourist detour south, we drove to Bavaria and her rich offerings and  took in a few days at the Neuschwanstein Royal Castle which was mind blowingly beautiful! Built by King Ludwig II, the fairytale castle inspired Walt Disney’s magical castle designs. King Ludwig was a lover of the arts and was transported by beautiful and dramatic music of many great artists of the time, especially Wagner, of whom he was a musical patron.


Ahead of his time, Ludwig introduced many architectual innovations to his castles, even creating amazing theatrical places such as the 'Venus Grotto' (in his Linderhof Palace), built under ground and exploring Wagners vision for the most complete sonic, visual and spiritual experience. One of my favourite classical pieces (amongst many) is Wagners 'Die Walkure' (Valkerie) epic. We recently saw this piece performed at the Sydney Opera House, which a transportive experience to say the least.

Below photo:Inside part of The Grotto
The 'Venus Grotto' was built for the king as an illustration of the first act of Wagner's "Tannhäuser". Ludwig liked to be rowed over the lake in his golden swan-boat but at the same time he wanted his own blue grotto of Capri. Therefore 24 dynamos had been installed inside the theater space to add to the transformative experience. Another example of Ludwig's creative vision and how even then, it was possible to illuminate the grotto in changing lights.

Below photo: Linderhof Palace in winter (The Venus Grotto is situated in the forest upper right)
"The Hall of Mirrors"- Linderhof Palace
This room was used by the king as some kind of living room. He enjoyed sitting in the niche, sometimes reading there the whole night. Because Ludwig II used to sleep in the daytime and stay awake in the night, the mirrors created an unimaginable effect for him when they reflected the light of the candles a thousand times. The parallel placement of some mirrors evoke the illusion of a never ending avenue.

In German mythology, die Walkure (Valkyries) would pre ordain the courageous who would die in battle, later flying down on their magical steeds to pick up and deliver the warriors to Walhalla (Valhalla). Selecting half of those who died in battle, (the other half go to the goddess Frige's (Freyja's), afterlife field Neorxnawang (Fólkvangr), the 'die Walkure' bring their chosen to the afterlife hall of the slain, Valhalla, ruled over by the god Woden (Odin). There, the deceased warriors become 'Harii', the wild army (einherjar). When the Harii, (einherjar) are not preparing for the events of Ragnarök, the 'Walkure' bear them mead.

Above is an old painting depicting the victorious battle of Teutoburg Forest, (Schlacht im Teutoburger Wald). Described by Roman historians, the battle took place in 9 CE, when an alliance of Germanic tribes ambushed and decisively destroyed all three Roman legions and their auxiliaries, led by Publius Quinctilius Varus. Despite several successful campaigns and raids by the Roman army in the years after the battle, they never again attempted to conquer Germania (The Teutons) territory east of the Rhine River.

‘Eli’s new release is sure to be stunning if this show is any indication’
ROCKFORD WINES live review with ARIA award winner, Jeff Lang.