CARDS ARE ON THE TABLE - ACOUSTIC VERSION

Cards are on the table - stripped back version

The five song EP is called ‘Cards are on the table’. It was recorded in four days in Steeve Bodys studio in Surry Hills, Sydney, and mastered on an old and beautiful desk at 301 Studios Alexandria which was brought over from Abbey Road in the UK. The songs were captured rich and warm in live takes and came up a treat. With a busy tour schedule ahead, mastering was booked and confirmed before recording had begun.

Ew had the art work for the new Ep completed while in the mixing stage. It relates visually to the first single, ‘Cards are on the table’ and is like a lino cut print of a blue bird (the blue bird of happiness) which Ew sketched first in ink. Out of interest, many Native American tribes considered the bluebird very sacred. According to the Cochiti tribe, the firstborn son of the Sun was named Bluebird. The Navajo hold the mountain bird to be a great spirit in animal form and associate it with the rising sun. The Bluebird Song is sung to remind tribe members to wake at dawn and rise to greet the sun: Bluebird said to me,“Get up, my grandchild. It is dawn. it said to me."

'Steeve set up a live room mic (Sanken CU 41) and an AKG 414 was used for the live guitar while I sang into a trusty old SM7B vocal mic. We were looking to capture the magic of live performance and dynamic, as opposed to recording everything separately. I ran through each song five times and we chose the best take from there.' Ew

'We got the four new songs recorded one the first day then thought about what colours we could add the following day. Arriving the following afternoon, Steeve had some bass ideas so we had a nice session sorting all things tasty in the bass department.'

'I sang harmonies through AKG 414 too and the pre amp was a digi design 003 rack with recording and mixing done in pro tools 9.0 We added some well placed percussion an American Indian drum and played with some trippy guitar sounds to colour in the right spots. All up…I was very happy and so was Steeve and we had some fun.' Ew

The last stage before pressing was the sound mastering which was booked before recording began. Ben Feggans of 301 Studios Sydney took the helm here. He used an extraordinary analogue sound desk which came all the way from Abbey road studios London to Australia. 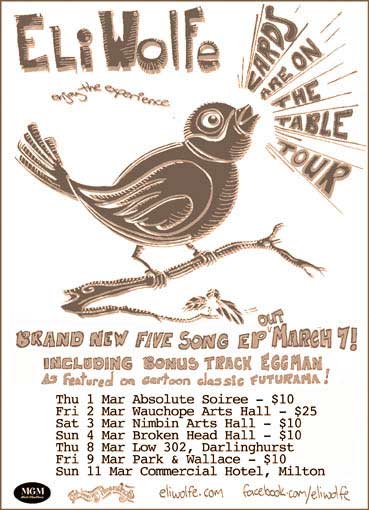 "Refreshingly honest and heartfelt...the vocals just seem to reach out  and grab you."
Drum Perth - 'Cards are on the table' EP Review, 2012